No-Fuss Alfredo Sauce, Brussels Sprouts, and Bacon-Wrapped Water Chestnuts – Who would have thought?

First let me thank Fior D’Italia (The Pasta Man) for the most wonderful ravioli that inspired an amazing meal!

For a change, I’ll start off with a picture of the plated meal, albeit taken after one ravioli had already been had eaten.

And here is the wonderful ravioli that I had purchased at the Wakefield Farmers Market in October.

Let me go on the record as saying that this is good stuff – really good stuff!

Okay, on with the hows and whys of this meal coming together on a Friday night after a REALLY Loooooong week….

The actual inspirations were:

2) Even though I freeze meats in single serving sizes and use the cold water method to speed up defrosting, it was late in the day to get all that going,

3) I didn’t have any potatoes and we had already had a lot of grains during the week, so we were feeling fussy about the choice of carbohydrate side dishes and the Brussels sprouts were looking…tired, and there didn’t look to be all that many, so a “meat and potatoes” sort of meal was out of the running, and

4) The final nail in the coffin (apologies for the dramatic analogy) was that neither Steve or I wanted to go to Farmland to something prepared or quick and easy to prepare.  SO…

Into the freezer I went and found the ravioli and remembered that Deb (The Pasta Man vendor at the market) had given me a handout (that I had actually not lost) with recipes for sauces for different pastas.

Unfortunately, their recommendation for a sauce to pair with this ravioli was based on creme fraiche and I had none, nor have I ever cooked with it.  And, upon researching online (I would be one lost cook without the Internet!) I could not find what looked like an easy or satisfactory substitute for creme fraiche for which I had the ingredients.  However, I figured some sort of white sauce would work and found the perfect recipe for a quick Friday night dinner on a site that also featured a recipe for making your own Gorgonzola and walnut ravioli – NOT so good for a quick Friday night dinner. Thank goodness for The Pasta Man.  🙂

You can see the recipe from which I worked via the ravioli link, above, but here is my  version:

In a medium sauté pan melt the butter, add the shallot and garlic, and cook until until fragrant and getting soft. Then, stirring constantly, add the half & half, parmesan cheese, salt, and pepper. Set aside and prepare the ravioli as directed. When the ravioli’s are ready, using a slotted spoon or a spider, add directly to cream sauce and toss, gently, on low heat until sauce is warm again and serve. If you want a bit thicker sauce, add the cornstarch mix and heat until desired consistancy is reached.

Along with the dirth of a long list of ingredients and processes, I was instantly enamored by the fact that this sauce can be set aside and then gently reheated once the pasta is added.  There is no room for a fussy sauce in a “quick and easy” meal!

Note: the original recipe called for heavy cream. Substitution suggestions say to add butter to half & half, so I added a tablespoon of butter to the recipe.  I am thinking I should have reduced the half & half a bit to compensate for extra liquid since the sauce did seen quite thin, hence my adding the bit of cornstarch.  But, FYI, I did not notice any ill effects on the taste or texture from using the corn starch. In fact, there was no separation or graininess after the leftovers spent the night in the fridge, so I’d say that, if you “cheat” with cornstarch, providing you keep it to a modest amount, there will be no harm done. Unless you are a purest.  <grin>

Okay – on to the Brussels sprouts.  I was originally going to use a recipe that was a big hit at Armory Street on Easter 2012, Honey Dijon Brussels Sprouts.  But, as I began to mix the sauce ingredients, I started doubting the virtue of the mustard flavor in the scope of this meal and also just happened to think of the wonderful lemon-flavored dressing I had in the fridge:

The sales of this dressing benefits The DAVID A. DEMARIA FOUNDATION, a 501(c)3 non-profit organization, mission is to further assist children of Malden and the surrounding areas with their educational and athletic needs. The foundation was created in the memory of David A. DeMaria of Malden MA, March 19, 1985 – May 30, 2007.

Like I said in the caption, this dressing is made with much heart and soul.  And, flavor – did I say bold, bright, yet not overstated flavor?  I picked up my bottle of this dressing at Farmland.  To learn more about this dressing, see ddsdressing.com or click HERE to see the list of stores offering this handy and tasty product.

Now, back to the Brussels sprouts. Click the recipe name for the original Honey Dijon recipe – which is splendid, by the way.

As I mentioned above, they looked a bit tired so I perked them up by putting them in a bowl of cold water and sticking it to chill in the fridge for about 1/2 hour while I was preparing the bacon wrapped water chestnuts described later in this blog post.

Note: If you don’t have lemon dressing you can improvise. But, I recomend trying to get some of this dressing. It is REALLY tasty and nice to have on hand for any recipe.

NOW for the moment you have been waiting for:

Okay – I followed the next recipe as written. I had never heard of bacon wrapped water chestnuts until a week or so ago via a Facebook post by Budget Bytes (I think – can’t find it right now) but I thought it would be a fun to try.  And, since I had a can of water chestnuts on hand and a 8 oz pack of bacon in the fridge, this Friday night seemed a good night to try it out. A quick online search that included the words “quick” and “easy” resulted in a really easy recipe that was also very tasty.  Here it is:

Marinate the water chestnuts in soy sauce for 1 hour. 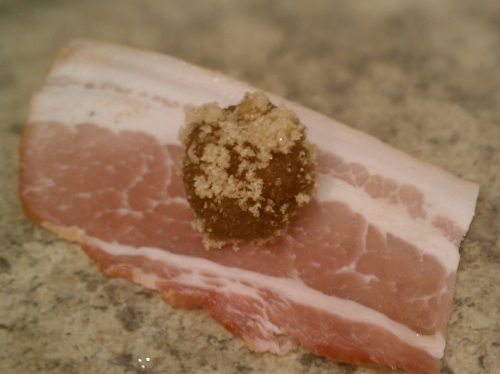 Arrange on a cake rack in a shallow baking pan.

IMPORTANT UPDATE:  Be sure to line the pan with foil!  I learned the hard way and just now, as I add this disclaimer five days later, finally got the pan clean after much soaking and scrubbing!
…carry on:

Bake at 400 degrees F for about 30 minutes or until golden brown. Drain on paper towels. NOTE: This can be prepared ahead of time and stored in refrigerator until ready to bake. 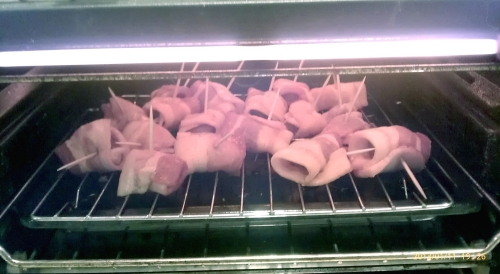 Disclaimer: I used my countertop toaster/convection oven and they were done in 18 minutes.  Note to self: Next time, put foil on the pan so you don’t have to soak it for days to get the burned on fat and sugar off of it….

And, that’s it. And there’s more!  Steve got involved in the repair of his Martin guitar, so, while dinner could have been ready  in well under two hours, both the  bacon/chestnuts and Brussels sprouts held nicely at a warming temperature of 170 and the alfredo sauce was fine at room temperature until we were ready for dinner. Once we were ready to eat, I just cooked the ravioli and finished off the sauce.

And that’s it. Definitely a meal that works for an easy meal for two but can also be made for company and even a crowd. It’s a keeper at our house, that’s for sure!