It was early on a Sunday afternoon and I was hungry, with no patience to wait for an evening meal.  And, with the weather not cooperating for Steve for anything sailing, I decided to do an abbreviated version of a Sunday Dinner – less complicated, but to be served by mid-afternoon.

I had two pork chops on hand that needed using soon,  a gorgeous hunk of fresh ginger, and a Granny Smith apple; a quick Google search using these ingredients as keywords brought me to the following recipe:

I ended up making some adjustments, but other changing the amounts of some ingredients, I stuck to the recipe, but using the following proportions:

The original recipe called for a 30 minute marinade in a Ziploc-type bag, but I used a corning ware casserole pan into which the two chops just fit.  On advice in a recipe review, I lengthened the marinade time, but I suspect it would benefit from an even longer marinade time if you are not in a hurry.  However, I agree with the reviewer’s warning to not marinade for too many hours since the acid in the vinegar and lemon juice can cause the meat to become mushy.

Once you are ready to cook the chops, preheat the oven to 350 degrees F. and, in a large saute pan, heat 1 tablespoon extra-virgin olive oil to almost smoking, then add pork chops, shaking off excess marinade. Brown on both sides. 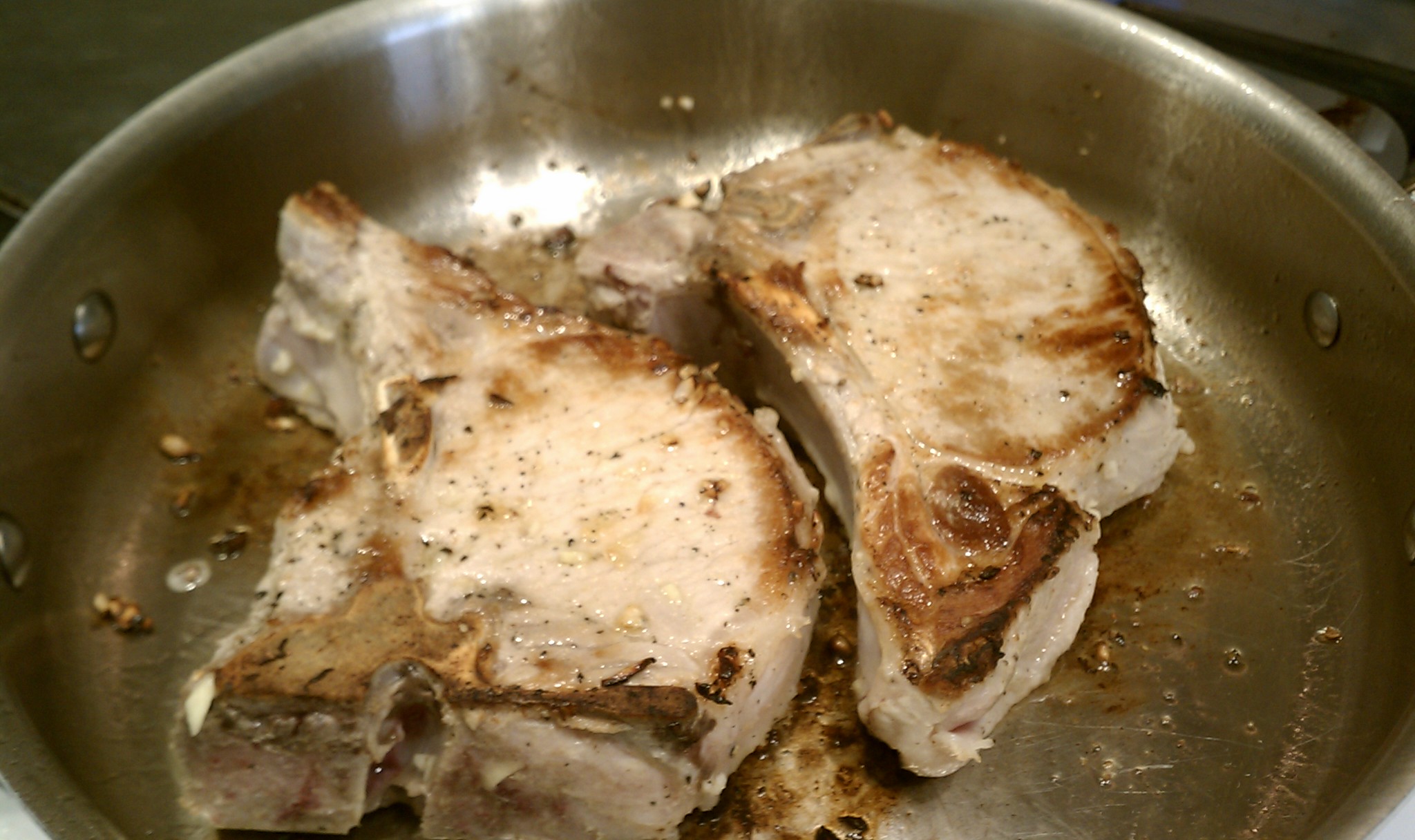 Next, place the chops on a sheet pan and put in the oven, uncovered, for 20 minutes or until internal temperature reaches 135 degrees F. (Check at 15 minutes)

In the same saute pan deglaze with the wine… 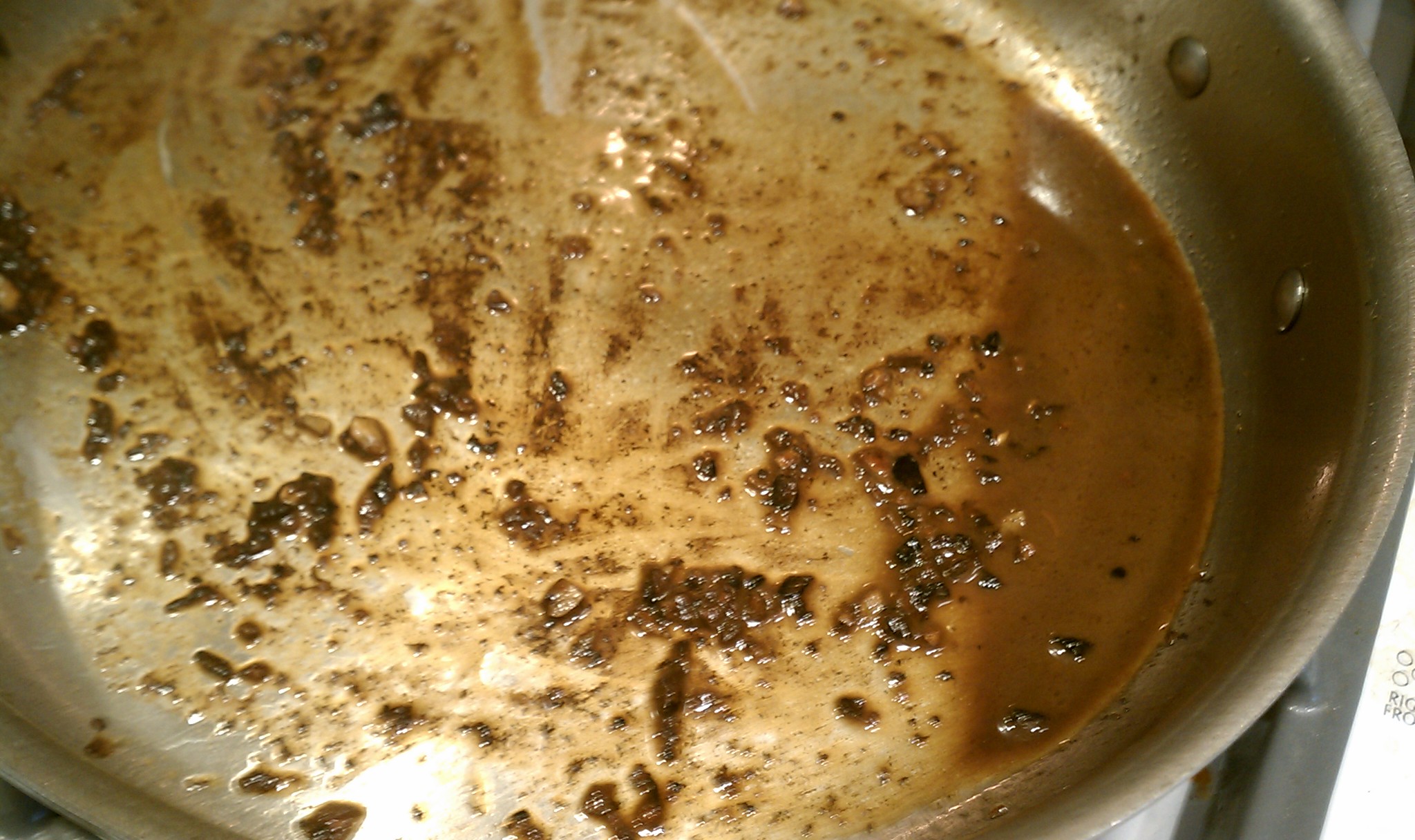 … then add onions, apples and raisins and cook until apples are soft and onions are translucent.

The original recipe did not specify whether or not to cover the pan.  I was not confident that the onions and apples would cook down enough without burning since there was not much liquid in the pan, so I covered the pan after 5-7 minutes and lowered the temperature from medium high to medium low. Next time, I will probably just cover from the beginning and then, if there is excess liquid, cook it off at the end.

The last step: Add butter and salt and pepper, to taste, and keep warm while waiting for chops to be done.

Once the chops are to temperature, remove from oven and put the chops onto to the apple mixture and pour any juices into the mix, as well. Hold covered, on low warm, until ready to serve.

To accompany, I opted for potatoes, since I had some on hand, although rice would also work well.  As to veggies, I had a bell pepper that needed using and I wanted to keep things simple, so I tossed together 6 or so small red potatoes, quartered, a green bell pepper in large chunks/slices, and a small onion, quartered, with kosher salt, freshly ground pepper, and a small amount of a ginger/citrus shake I had in the cupboard thanks to a gift from my niece and baker/cook extraordinaire Meggie Dennis, finishing with a liberal amount of olive oil.  I have a counter-top toaster oven with a convection option, so I convect-roasted the potato mix, covered with foil, for around 35 minutes at 375 and finished off for about 5 minutes at 425 uncovered.  But if you have just one oven, preheat to 350 to start roasting the potato mix, covered, for 35 or so minutes before also putting the the pork chops in for their 20 minutes, and then raise the temperature to 425 to finish them off, uncovered, after the chops are done, as needed.

And, there you have it.  It got a “keeper” vote from both Steve and me. And, I especially like the technique of marinating, browning, baking, and creating a pan topping or sauce since it lends itself to unlimited variations in flavors. Roasted veggies of any sort also lend themselves to all sorts of menus and flavors. A keeper indeed.