I found this recipe in my “keeper” folder but, of course, could not remember much about it…except that both Steve and I must have enjoyed it, hence its place in the “keeper” folder.  Memory like a screen these days…  ANYWAY… I tried it again and am making sure to record things this time.  🙂

Here the recipe from Allrecipes.com, one of my favorite recipe sites, from which I worked: Bottom Round Roast with Onion Gravy

And, here is my take.  First of note is that this is a stove-top dish, although I am sure it would do fine in a 190 or 200 degree oven or in a slow cooker.  If I try it that way, I’ll make note of it here.  But, the nice thing about this recipe is that it CAN be make on a burner.  In fact, when I was about to make this recipe, my oven suddenly defaulted into Sabbath mode and only the burners were working…Thankfully I was able to reset things, but the good news is that I could still have made this dish if the the oven had remained out of order!

But, I digress.  So, here is my take on this dish:

After cooking the roast

First, I sliced up the onion and minced the garlic.

The original recipe was intended as a very easy prep dish, and the reviews indicate that it all tasted great without browning the meat first. But, I wanted to add some extra flavor, so I started off by browning the roast in my dutch oven after seasoning with freshly ground pepper, kosher salt, and crumbled dried rosemary.

I then removed the roast and put the onions, garlic, fresh rosemary and thyme, and Merlot in the pan, turned up the heat, and deglazed the pan, scraping up the brown bits.

Next, keeping things simmering, I added the bay leaf,  and sprinkled in the vinegar before placing the browned roast, with the layer of fat up, on the onions.

I then covered and cooked for three or so hours.  I used a heat diffuser to make sure nothing burned, but it probably would have been fine without one. But do make sure you use a heavy pot! I kept the burner on low and made sure that I heard just a little bit of sound when I put my ear really close so I knew it was at a low simmer, but didn’t let it stay hot enough to cause substantial steam to be released from under the cover. Basically, you want the temperature to stay under a boil, and preferably around or under 200 degrees. AND, don’t lift the cover until you think the roast is done!

My next step was to remove the roast and tent with foil on the cutting board while I finished the gravy, starting by adding the other 1/2 cup of Merlot and simmering until the liquid was reduced by about half.

I then added the 3/4 cup beef stock (I actually used veal stock, but that is another story!) and the 1/2 teaspoon each of dried thyme and rosemary, and cooked it down a bit further.

Next, I added the mushrooms.

To be honest, I don’t remember if I added any flour to thicken.  Based on my handwritten notes, I don’t think I did.  But, it is always an option if you want to thicken the gravy.

The final steps: carve the meat, add to the gravy, and plate! 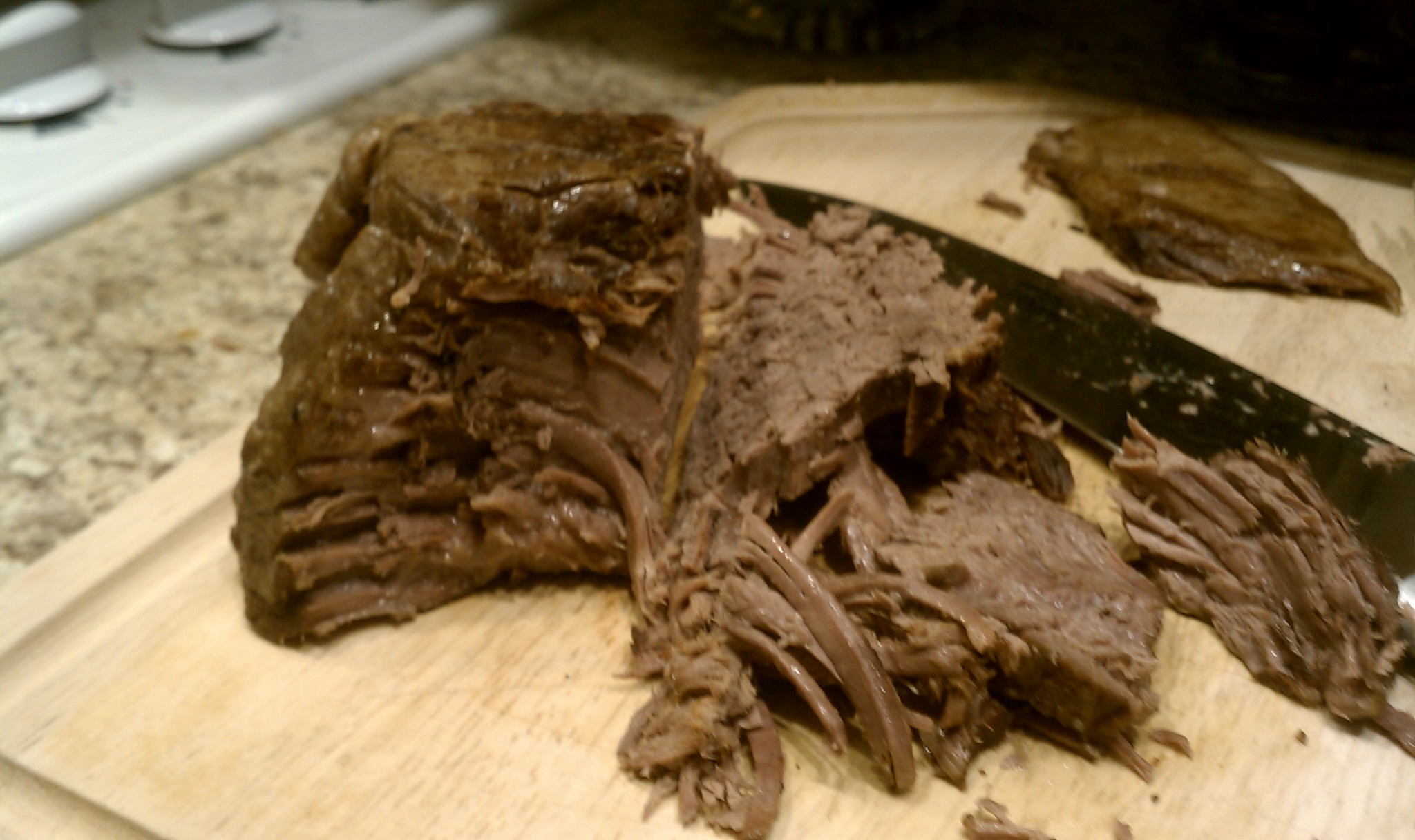 This was a really great recipe.  And truly, using a good red wine was key to it being exceptional.  To end this post, I served the beef with roasted potatoes (chop as shown, sprinkle with seasonings of choice (include rosemary for this menu) and olive oil, and roast at 425 for 45 or so minutes or until done) and steamed broccoli and carrots, as shown. Just lovely.

So easy, and leftovers are even better!  Enjoy!